The price of grain had risen towards the end of the eighteenth century. As a result, the nobility began to see estate management and the development of farming as a respectable pastime. They now moved to live in their manors. It soon became fashionable to build lavish manor houses and furnish them at great expense. 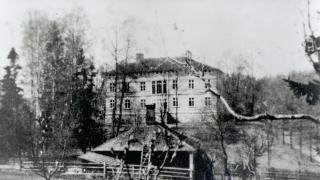 The main building in the 1890s. In the foreground is the Alphyddan, or alpine hut, which was modelled on the laundry building during the Munsterhjelm’s time (since demolished).
Photo: Vantaa City Museum

In the eighteenth century, manors hardly differed from wealthy peasant houses. Even in the early-nineteenth century there was a single-storey farmhouse painted with red ochre at Håkansböle. In 1838 the estate was purchased by Lieutenant Colonel Anders Lorentz Munsterhjelm. He soon had a new manor house built. It was designed by Anders Fredrik Granstedt, who had received his architectural training from Carl Ludvig Engel, best known for the buildings surrounding Helsinki’s Senate Square.

Stylistically, the two-storey manor house represented early nineteenth-century neoclassicism. It was built of timber but the horizontal panelling and the classical decorative motifs of its façade gave it the appearance of a stone building

During the Munsterhjelms’ occupancy, a number of outbuildings were constructed: the steward’s house, the bakehouse, a building for wood carving, the craft room, the laundry building with a mangling room, the granary, the stable, the wagon shed, the cattle barn and the drying barn. The park was enlarged and remodelled as an English landscape garden.

Lieutenant Colonel Munsterhjelm sold the manor within the family circle in 1878. It was bought by a student of law, Konni Zilliacus (1855–1924), the husband of Munsterhjelm’s stepdaughter, Countess Lovisa Ehrnooth.

Zilliacus was particularly interested in horses. The manor’s bookkeeping from this time has many entries about work horses and riding horses, as well as dogs and boots. Zilliacus had a state-of-the-art stable built for his horses near the main building.

Zilliacus sold the manor in 1884. It was once again bought by a relative, Oscar Andelin (1840-1905), the husband of Munsterhjelm’s second daughter, Aline. During that time, the size of the estate was 900 hectares, 175 hectares of which were cultivated.

Andelin left active military service in 1890 and could now focus on managing the estate. Despite having no previous experience, he was successful in his endeavour. At the beginning of the twentieth century, the manor house was renovated and painted with yellow ochre.

Oscar Andelin died in 1905, after which his heirs sold the manor to Arvid and Emilia Sanmark, who was Munsterhjelm’s granddaughter.

History of Håkansböle, part I