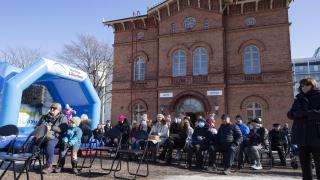 CultureTourismInformation and administrative services
Vantaa City Museum has three offices. Exhibition space and the museum's office are situated at Tikkurila's old station building, while the museum's collection services are located in Hiekkaharju. In addition, the museum arranges exhibitions and events at Håkansböle manor.

Legislation and municipal decrees also guide the work of the museum. The most important legislation includes the Museums Act, the Antiquities Act, the Museums Decree, the Act on the Protection of the Built Heritage, the Copyright Act, the Personal Data Act and the Archives Act.

The long history of Vantaa in brief

Publications of the museum

Publications‍ related to the history of the region are published regularly in the publication series of the Vantaa City Museum. You can read them at the museum’s reference library, and you can also purchase the most recent publications at the Pieni museopuoti museum shop.

The museum and the museum building

The first exhibition of the City Museum opened at the old Tikkurila railway station in 1990. The history of the museum’s birth reaches decades further than that, however.

The idea of establishing a museum was born among those interested in local history already in the 1950s. The ‘Helsingin pitäjän kotiseutu- ja museoyhdistys’ local heritage and museum association of the Helsinki parish was established to promote the issue in 1961. The efforts resulted in a local museum in the granary of the Helsinki parish village, where the Helsinge-Tusby Ungdomsförbund r.f. collection is still being exhibited.

The cultural office of the City of Vantaa had also started to acquire items for the museum collections, and there was active cooperation with the local museum. The cultural office focused on gathering a photograph and school collection, because one of the ideas was to establish a school museum.

Citizens’ initiatives for establishing a museum were submitted to the city government and the City Council in 1978 and 1979. The old Tikkurila railway station, which was empty, was considered a suitable place for the museum exhibitions. The Vernissatehdas factory building on the other side of the track was considered as premises for the collections. However, young people took over the Vernissatehdas building with great fanfare in 1985, and the premises remained in the use of youth services.

In 1988, the museum had to move again into barracks in Lummepolku, until the office and exhibition premises of the museum were completed in the renovated old Tikkurila railway station in 1990. The first exhibitions opened in December of the same year. The City of Vantaa purchased the building in 2007. Until then, the station had been rented from the State of Finland.

The stately red-brick building used to be a railway station. It was completed in 1862 as one of the intermediate stations on the first railway in Finland. The building was designed by Carl Albert Edelfelt, the official architect of the Häme Province.

There are no regular guided tours in English, but you can ask the museum for a guided tour for your group.

See the page ‘Exhibitions and events’ for more detailed information on guided tours.

The exhibition space is located on two floors, but you can use a lift to go from one floor to another. Our old museum building is not completely accessible, however. The doorways have thresholds and the front door is heavy to open. You can find more detailed information about the accessibility of the building on the page of the location. The entry to our exhibitions is always free for everyone.

The museum does not have a café of its own, but there are plenty of excellent cafés and places to eat nearby.

See the page ‘Exhibitions and events’ for more information on guided tours.

See first what our Finna page has to offer for the area, time period or topic in which you are interested. If you cannot find the images you want, you can contact the image archives by email. You can find the contact information at the bottom of the page.

Read more about donating material to the museum on the page ‘Participate in the… You can find out more about our collections policy on the ‘Collections’ page. Browse images of Vantaa on our Finna page opens in new window, links to another website

In Vantaa, the updated information from all of the cultural environment inventories has been collected in the collections management system of the museum. You can find it electronically via the kartta.vantaa.fi service.

You can show all inventoried buildings on the map (in addition to ancient relics, protected buildings and built cultural heritage sites of national significance) that have been found to have cultural and historical value:

You can see the local detailed plans in the menu:

Cultural landscapes with national, regional and local significance have also been protected in the Vantaa city plan. You can show them in the map service:

In addition, you can find things such as old maps and aerial photographs in the map service that you can use to study the changes in the cultural environment.

Building-specific protection orders are specified in the local detailed plans (also see the response to the previous question).

If a site is protected in the local detailed plan, it cannot be demolished according to the plan regulation. If no decision has been made yet on the protection of an inventoried building, building control will hear the City Museum during the demolition permit procedure (requirements for granting a demolition permit have been specified in the Land Use and Building Act, sections 118 and 139). The cultural and historical value of the building and the possibility of preserving it will be investigated in more detail during the permit process.

Continuing the current use of the land in the surroundings of an ancient relic is allowed. This means that you can use the plot for the same activities that have been carried out there before, too.

If you want to construct new buildings or excavate the ground to lay pipes or cables, for instance, you need to contact the archaeologist of the City Museum. You can review the plans and consider suitable solutions with the archaeologist.

For example, you can invite the Trial Excavation Team of the Finnish Heritage Agency to the site; the team will carry out any archaeological investigations necessary before the construction work starts. Private individuals are usually not invoiced for small research projects.

The authorities request statements of the City Museum for land use planning projects and permit applications. A statement is requested if there is a cultural environment site or a valuable landscape located in the area subject to the plan.

In addition to issuing statements, the building researchers and the archaeologist of the City Museum offer advice in projects implemented at cultural environment sites.

The easiest way to contact the building researchers and the archaeologist is by sending them email. Their contact information can be found at the bottom of the page.

I have bought a metal detector and would like to get started with the hobby. What should I keep in mind? / Our association would like to adopt a monument, how can we do that?

See instructions on the page ‘Participate in the work of the museum’.

Participate in the work of the museum Find instructions for the Adopt a Monument activity or how to get started with metal detecting as a hobby. Built heritage sites on the museum’s Finna page opens in new window, links to another website