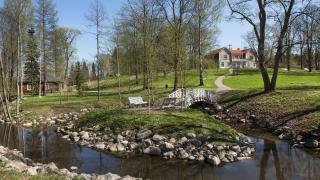 In the 1780’s a park was established on the Håkansböle estate. At the time, the manor was owned by Johan Sederholm, an influential merchant from Helsinki and landscape gardening was fashionable among the landed gentry of the 18th century.

Sederholm’s garden included a herb garden and also quite possibly an orchard. Unfortunately, no further knowledge about the garden has survived. It is possible that the embankment and the great maple trees date back to this period.

Sederholm also had a summerhouse built in the park to commemorate the visit of King Gustav III. During his visit to Finland in 1775, the King had a rest in the grounds of Håkansböle, near Lake Kuusijärvi. Legend has it that he dined alfresco on the “bare ground”. The summerhouse was later converted into a residence and is now known as Mutteritalo (literally ‘nut house’ on account of its octagonal shape).

While the manor was in the Munsterhjelm family’s ownership in the mid-19th century, an English landscape garden was built around it. A small man-made island called Kaffeholmen, (‘Coffee island’ in English), was built into the Kormuniitynoja, a nearby stream running through the estate.

A ring of birch trees was planted to line the perimeter of the island, with benches forming a second circle inside them. Kaffeholmen wasn’t just for having coffee: it also served as a place for the Munsterhjelm children and their friends to stage small theatre performances.

The City of Vantaa reconstructed the artificial island in the early 2000s as a part of restoring the entire park. Another element of the Munsterhjelms’ old garden to survive is an oak-lined avenue, leading up to the manor from the main road. Planted in honour of the Munsterhjelm countess, saplings from the trees were grown in the manor’s own nursery garden.

The garden is developed by the maternal line

Since the Munsterhjelms, ownership of the manor has been passed down through the maternal line. This has undoubtedly contributed to the purposeful management and development of the manor garden.  The gardener Karl Gustaf Fagerholm was responsible for maintaining the garden for two periods in the 19th century, 17 years in total.

After the Zilliacus and Andelin families, the manor passed to the Sanmarks. The Sanmarks had a new main building built according to the designs of Armas Lindgren. Lindgren also designed the manor garden to be a part of the aesthetic whole, Gesamtkunstwerk, the Håkansböle manor.

Below are some of Armas Lindgren’s sketches from the collection of the Vantaa City Museum. Plans for the gazebo and the elaborate lamppost were never realised. The exterior of the main building changed as the plans moved forward. 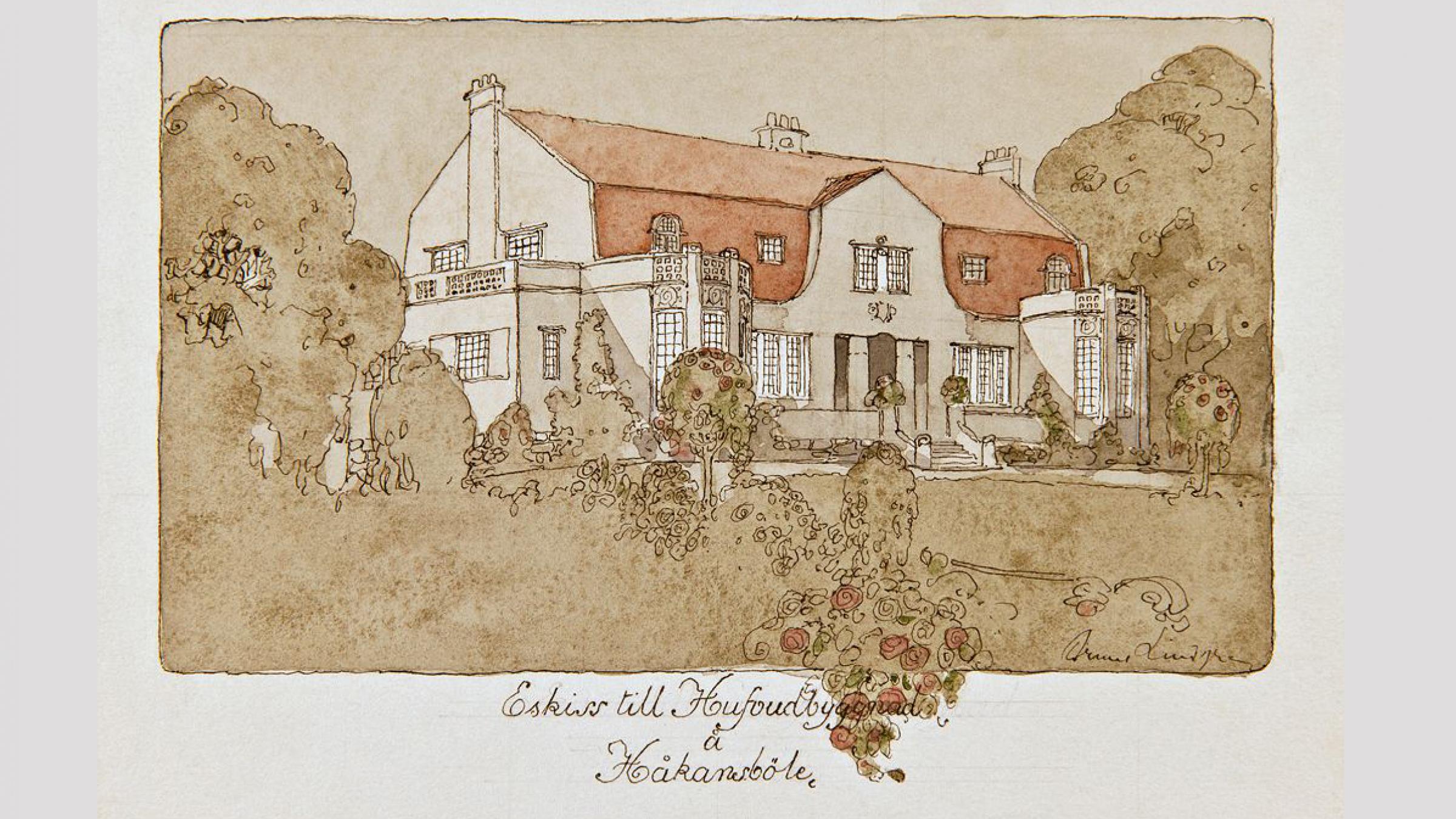 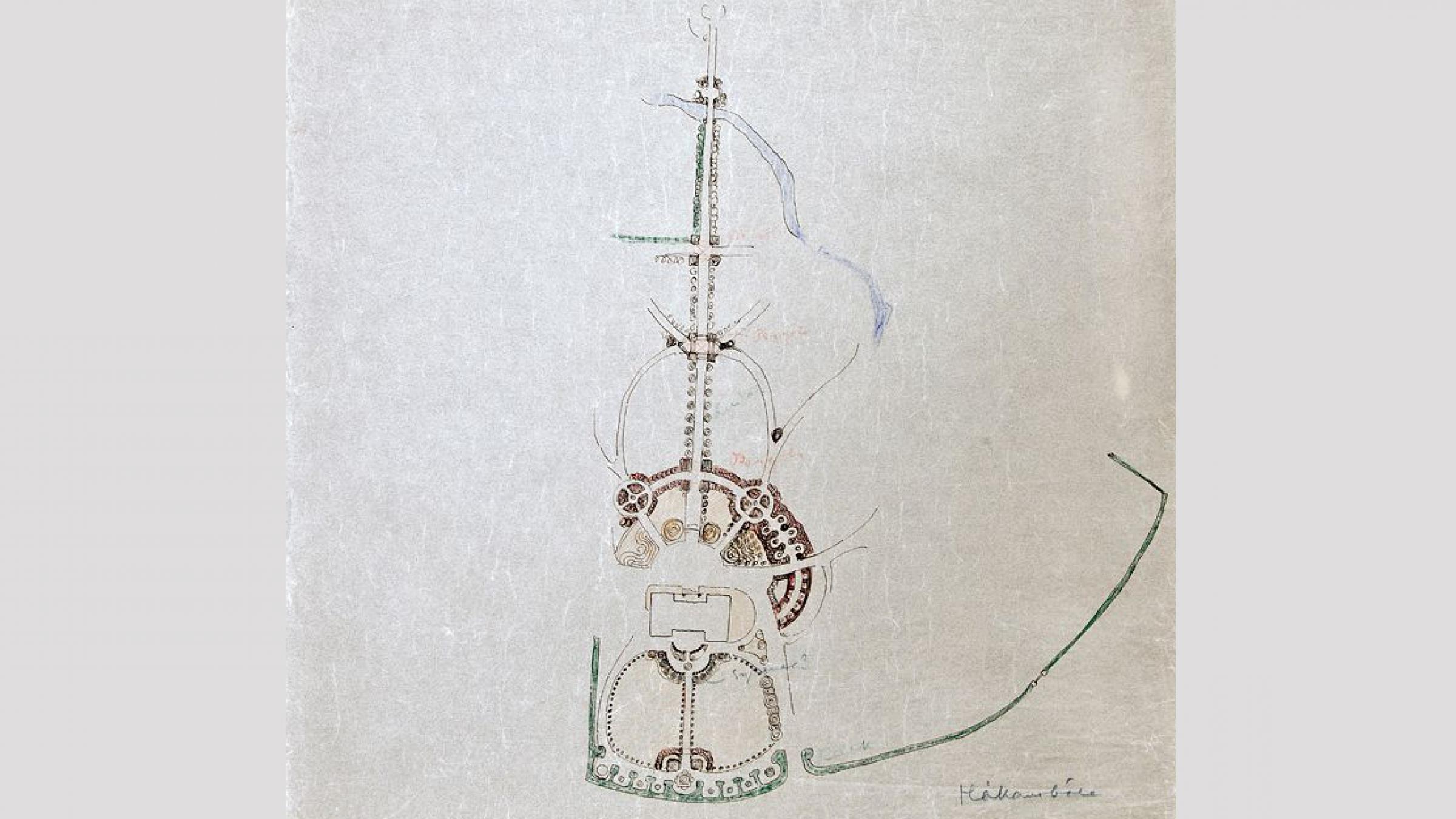 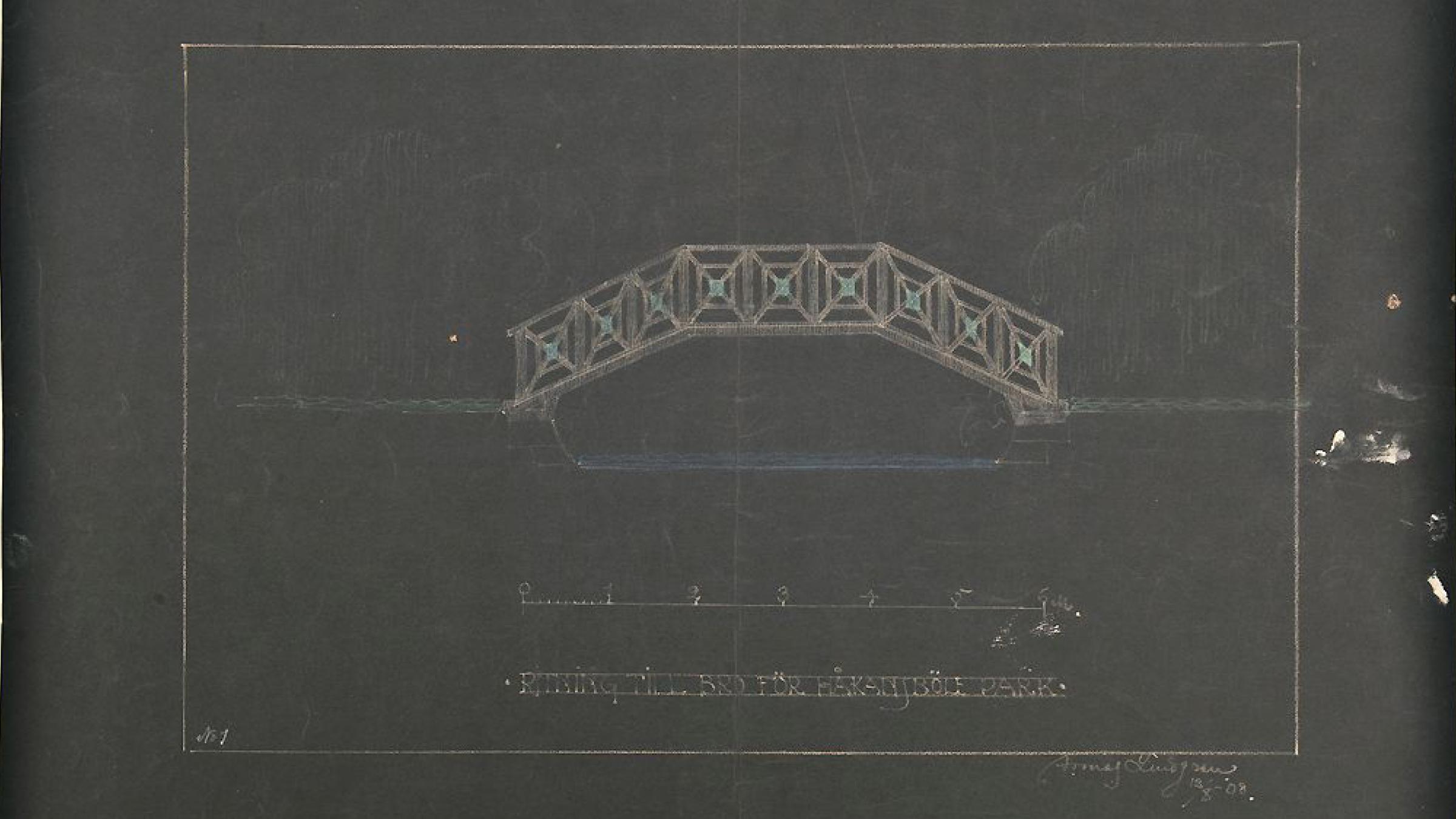 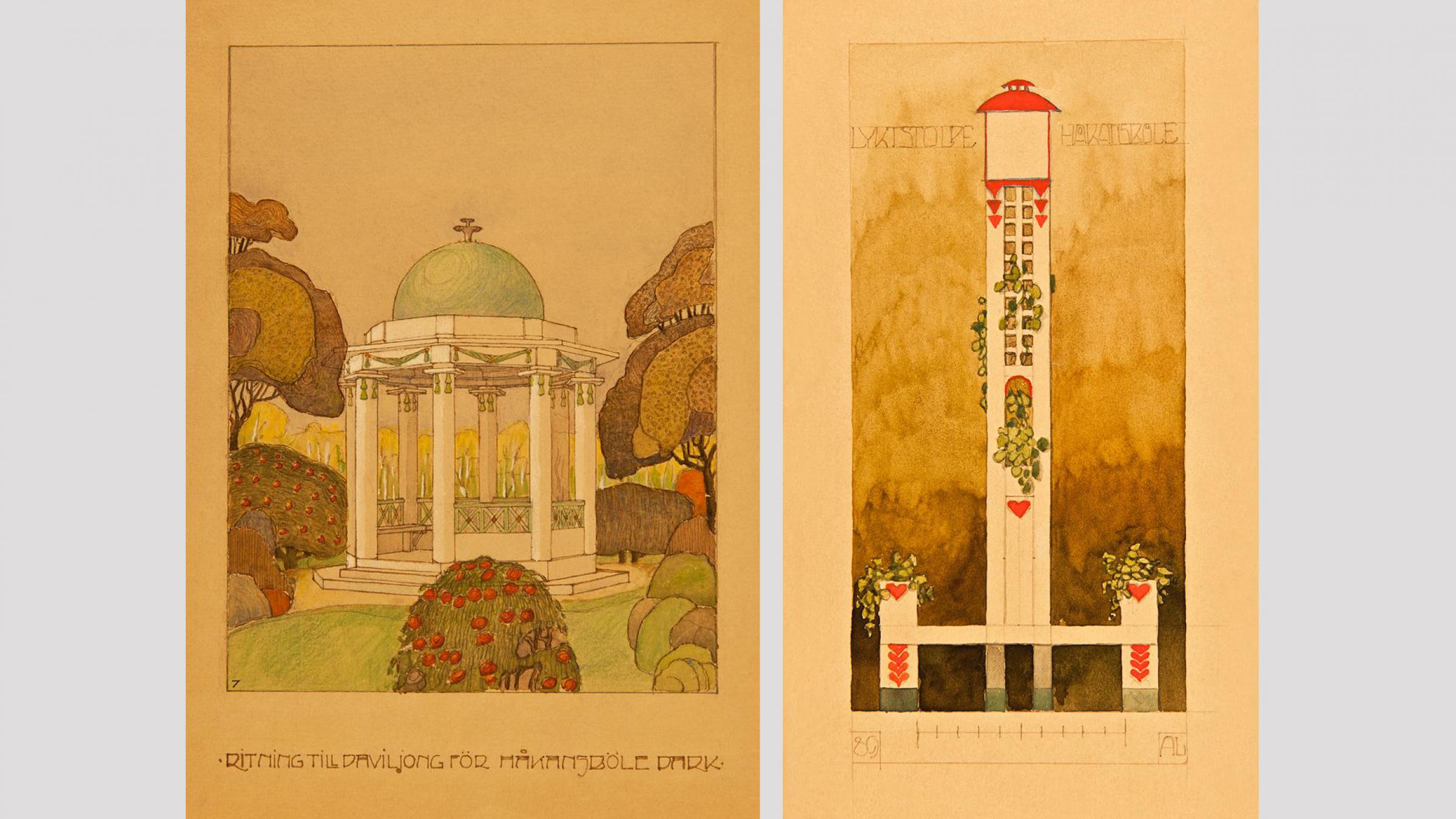 A Jugendstil park as part of an aesthetic whole

In 1906, the city gardener Svante Olsson drew up the plans for the garden using survey data gathered by Niklas Järnefelt and Lindgren’s sketches. Garden walkways curved with elegance and perfect symmetry. From the main entrance, a long path lined by linden trees led to the other side of the stream, into a forest park and a viewing point.

Even though the plans for a gazebo on the viewing point were never realised, you could cross the stream by a bridge designed by Lindgren. A similar bridge led to Kaffeholmen. At the end of the oak-lined avenue was a wooden gate, also designed by Lindgren. The gate was later replaced with an iron copy. The present-day park, completed in 2011, was designed following Olsson’s plan.

The park brought the Sanmark children great joy. The playhouse called “Lilla Böle” is most likely Lindgren’s work. It was constructed at the same time as the main building. Games like crocquet and badminton were played in the park’s extensive green spaces. A tennis court was located in the wooded area next to the stream.

The park was full of phloxes, lilacs, roses and laburnum bushes. The market garden was located further off, near the estate manager’s house. It was separated from the rest of the park by the orchard.

The first greenhouses were built on the estate in 1905. Initially, the flowers and vegetables were grown solely for personal use, but later greenhouse cultivation became an important source of income for the manor. Carnations, roses, tulips and daffodils were grown for sale. Fuchsias grown in the greenhouses were planted in the park.

Over the years, the Kormuniitty area has seen many man-made ponds of different sizes. They were used to water the plants in the park and in the greenhouses. The current pond is similar to the one in the 1940s.

The City of Vantaa acquires the manorial park

After the City of Vantaa bought the estate in 2005, research into the park’s history, as well as plans for its restoration, began. The park was restored between 2008 and 2011. The project received funding from the European Regional Development Fund and the Ministry of the Environment.

The grounds of the Håkansböle manor are an important part of Finland’s cultural heritage. The park is open to the public year-round and serves as a site for a variety of events.

History of Håkansböle, part I